A Little Hope Is All We Wanted

Newcastle fans have always been an easy target, and for a club who we are repeatedly told are 'not a big club' (whatever that means) we get more than our share of critique. Finally the dream of new ownership may well soon become a reality, after thirteen painful years, it's time to say to these hypocrites; Where have you been for the last thirteen years? Where was your outrage at Ashley? Where were your tweets, posts and articles then, huh? In the last few days as I've trawle
31 views0 comments
Sam Mulliner. Follow on Twitter:

30th November 2013, that's when this carry on started, over six years ago! The proposed new "stunning new state-of-the-art training complex as part of a multi-million pound redevelopment of the Club's existing 35-acre training ground site" was something that surprised and excited supporters into believing the penny had finally dropped, and our owner was finally investing for the future. Then director of football, the ever colourful Joe Kinnear, said: "This is a hugely excitin
287 views0 comments
Sam Mulliner Follow on Twitter:

Newcastle United rarely do things the easy way these days, and getting players "over the line" and signing contracts seems to be laborious to say the least. After Steve Bruce's first few games in charge, we were told contract offers were on the table for the key players in our squad. The likes of Isaac Hayden, Matt Ritchie, Jonjo Shelvey, Fabian Schar, and Martin Dubravka all were reportedly offered extensions at the club, but so far only Dubravka has put pen to paper on a ne
22 views0 comments
Sam Mulliner @SamMulliner

2019 has been a year of ups and downs for Newcastle fans everywhere (no change there), but what can we look forward to in 2020? Here is my tongue in cheek look at what we can expect in the next twelve months: January The New Year starts with a trip to Spotland for the FA Cup tie at Rochdale. In front of the TV cameras, Steve Bruce takes the cup run seriously by fielding a changed side that scrapes a 1-1 draw, thanks to a typical Matty Longstaff wonder strike. For the replay b
18 views0 comments
@newcastlefanstv

“To see Sean do it last year and Matty get his opportunity - and he looked like it was his 25th or 50th game, not his first - was so pleasing for everyone. I think it was fantastic and we’ve seen the public reaction, not just the Newcastle public. I saw what Gary Neville tweeted after the game. “We want to be the best academy in the region. Our vision is we want local boys to look at it and think it’s not going to be full of boys from London, Manchester or abroad. Between nin
4 views0 comments 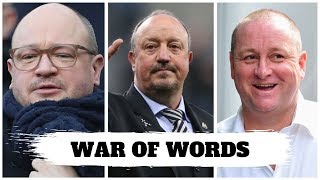 Following the news that Rafa Benitez is on his way out of Newcastle, I will be reviewing his tenure on Tyneside. This isn't an article I wanted to do now but I will be doing a similar one when Mike Ashley leaves. When Rafa arrived on Tyneside to replace Steve McClaren, the club was on it's knees and sitting 19th despite spending approximately £80m in the two transfer windows. Things didn't start well for the Spaniard though as only one point from his first four games (includi
13 views0 comments
@newcastlefanstv

“The significant increase in revenue, together with prudent financial management, resulted in the club showing a profit and that is reassuring, given the substantial loss in the previous year. There is much more work to be done but these positive financial results give the club a strong platform on which to build. We all want to see the club improve and be competitive at every level, and in every competition. We are convinced that the best route to achieving this is to do so
10 views0 comments
Carl Richardson

It was reported in the Chronicle on Thursday 20th of September, that manager Rafa Benitez will be holding a transfer summit with Managing Director Lee Charnley, Head Scout Steve Nickson as well as European scout Paul Baker, reportedly to discuss plans for January’s transfer window and to look at the Academy and U-23 setup. Could this one meeting shape the future for the Club, as far as the manager is concerned? This will be Rafa’s third January transfer window in charge of th
16 views0 comments
Lee Lawler (@NewcastleFansTV)

Charnley told the Chronicle: “We did spend money to get promoted. If we had spent a significant amount less on wages, would we have a greater figure to spend on transfers? Yes, we probably would. But we might not be back in the Premier League now had we done that, and it would be a moot point. The reality is that 2017/18 was our first season back in the top flight, having missed out on the first year of the current TV deal, and we are trying to compete with teams who have mor
13 views0 comments